Groups of people seeking to invest together have been turning to the crypto-native DAO (decentralized autonomous organization) structure for a collective decision-making framework. While an investment DAO typically can only have up to 100 members in order to stay compliant with SEC rules, Orange DAO has found a way to bring over over 1,000 Y Combinator alumni together to back web3 startups through an associated venture fund.

“They wanted to support our mission of bringing more entrepreneurs into web3. For them, working with us and getting exposure in front of our entrepreneurs is really important, because if one of our members builds a billion-dollar DeFi protocol, the investment that they made in us is trivial compared to the amount of upside that they get from it,” Huh said.

The rest of the funding, he added, came from DAO members who became limited partners in the fund itself as well as some institutional investors. 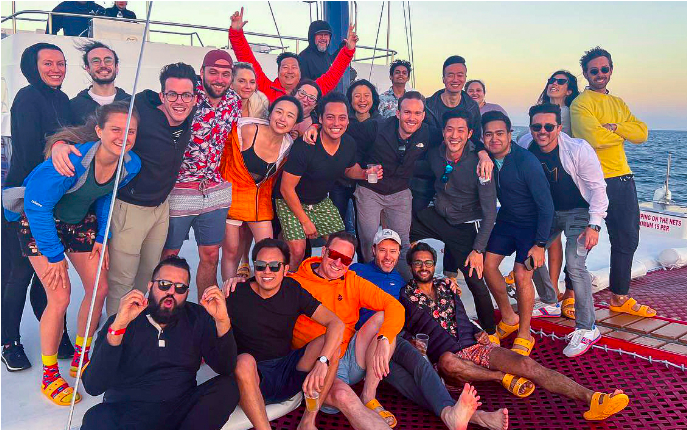 TechCrunch last spoke to Huh in January shortly after the fund launched. Back then, Huh explained the DAO’s unique structure and why it has been able to stay compliant despite its large size.

The DAO itself is structured as an LLC, Huh said, while the fund is run as a separate legal entity by Huh and a few other general partners. That way, the fund doesn’t have anywhere near the SEC’s cap of 100 investors for a venture group, though Huh and the other GPs leverage the DAO’s hundreds of members to source investment ideas and conduct diligence.

The group had originally set out to raise $10 million in funding from investors to back crypto startups, Huh told TechCrunch this week. Since January, the group has grown to 1,300 members from 1,000 and backed 90 startups, up from 30 at that time, Huh said.

As a first-time venture fund, Orange DAO can’t rely on a prior track record to attract new capital, Huh said. Instead, he sees its advantage stemming from the network of Y Combinator alumni in the DAO who come together to help the GPs originate and diligence opportunities.

“By having OrangeDAO do the work of supporting our portfolio companies and bringing in deal flow, we’re looking at 10 times more deals than we’d normally see,” Huh said.

Legally, the DAO and the fund are separate, but the DAO acts as a “funnel for entrepreneurs to apply for funding,” Huh said. Any carry, or profits, the GPs earn on the fund is reinvested back into the DAO’s treasury to support new investments, he added.

So what are the benefits of investing through this DAO structure? Huh said members can capture upside by becoming members of the DAO and voting on what it does with its treasury without needing to be accredited investors in a venture capital firm themselves. For outside investors in Orange DAO, the appeal comes from its strong network and deal flow stemming from the connectivity to Y Combinator, though YC does not officially have any affiliation with Orange DAO.

Orange DAO also funds a fellowship program to pay ~10 Y Combinator founders to work on web3 projects for 10 weeks, with the goal of attracting more founders to the web3 space, Huh added. With the new influx of cash, Huh and his team hope to expand the fellowship program in addition to making new fund investments.

The main innovation here is the decision-making process Huh has helped formulate for Orange DAO, which he developed through his own DAO accelerator startup, Origami. Origami, which happens to be one of Orange DAO’s portfolio companies, says it also provides services to Techstars’ Constellation DAO and Kauffman Fellows’ VC3. Both operate using a similar model to OrangeDAO to make venture investments, according to Huh.

One challenge these venture DAOs face is how to distribute tokens to members for their contributions to the group, Huh said. Although Huh did not explain exactly how DAO members are compensated, he said they have their own metrics and bounties used to assess each member’s contribution.

Origami’s tech stack seeks to streamline some of the processes involved with coordinating between hundreds of group members in a venture DAO.

“This was one of the challenges of being early in a very nascent industry,” Huh said of launching Origami last year. “You have to establish best practices and turn them into really good efficient processes, so between like the legal advice, [deal] structuring advice and organizational structuring advice, our services help DAOs boot up faster and [through our] software, you’ve got a vertically integrated data system.”

Will M&A bring relief to media startups amid a public-market hangover?

As our populations age, this startup is turning live-in care into a gig-economy platform