Instagram head Adam Mosseri posted a video this morning addressing mounting concerns about changes to the app’s feed and its increasing emphasis on video. Even Kim Kardashian and her sister Kylie Jenner, the most-followed woman on Instagram, posted their distaste for the new features, so you know it’s serious — remember when Kylie singlehandedly drove down Snap stock because she said she didn’t open the app anymore?

It’s no secret that over the last year and change, Instagram has been chasing the dominance of TikTok, so much so that it declared it’s no longer just a photo-sharing app. The platform has even offered influencers tempting cash bonuses if they’re successful enough, exploiting TikTok’s meager creator payouts.

But you might have noticed that your Instagram feed kind of sucks lately. Everything is a reel, there’s a test of a full-screen feed that few people actually like, and some meme creators even waged an in-person protest over the weekend at Meta’s New York City HQ (…which happens to share a building with Yahoo, our parent company).

So, all things considered, Mosseri had to post a reel of his own to clear the air around some of these tests and changes.

“We’re experimenting with a number of different changes to the app, and so we’re hearing a lot of concerns from all of you,” Mosseri said (is he more concerned with the meme creator protests, or the Kardashians’ displeasure? Who can say!).

Mosseri affirmed what we’ve already known — that the controversial full-screen feed is just a test for a small percentage of users — but he owned up to the fact that this new interface isn’t really… ideal.

“I want to be clear, it’s not yet good. And we’re going to have to get it to a good place if we’re going to ship it to the rest of the Instagram community,” Mosseri said.

He then addressed users’ concerns about seeing fewer and fewer photos on an app that was once a home for photographers. The graphic that Kim Kardashian and Kylie Jenner both shared said, “Make Instagram Instagram again,” with a parenthetical that added, “Stop trying to be TikTok, I just want to see cute photos of my friends.” Combined, the two mega-famous sisters have about 686 million followers on Instagram. 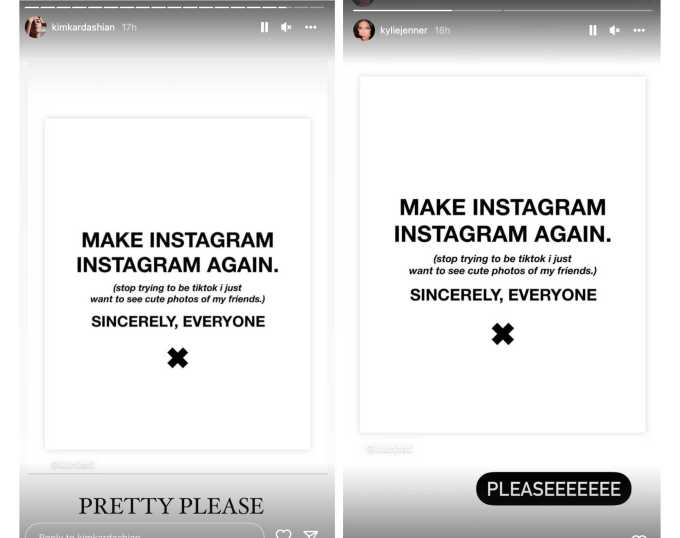 “I want to be clear: we’re going to continue to support photos. It’s part of our heritage,” Mosseri said, affirming that he, too, loves photos. “That said, I need to be honest: I do believe that more and more of Instagram is going to become video over time. We see this even if we change nothing. We see this even if you just look at chronological feed.”

In the petition that the Kardashians shared (which, admittedly, is a bit hard to access, since both Kim and Kylie posted screenshots of another person’s story) there are more demands than just bringing back more photos.

Tati Bruening, the fashion photographer behind the petition, is also advocating for Instagram to more transparently listen to creators.

“It feels wrong to switch the algorithm on creators that have made a living and contributed to the community forcing them to change their entire content direction and lifestyle to serve a new algorithm,” Bruening wrote in their petition.

Users have also been frustrated with the number of “recommendations” on their feeds, which is how Instagram serves you content from accounts you don’t follow. In a nutshell, it seems like Instagram is trying to recreate the success of the TikTok For You Page.

“If you’re seeing things in your feed that are recommendations that you’re not interested in, that means that we’re doing a bad job ranking, and we need to improve,” Mosseri said. “You can X out a recommendation, you can even snooze all recommendations for up to a month, or go to your following feed.”

The Instagram head said that these recommendations will continue appearing in feeds, though, since he believes this is the best way to help creators reach more people, especially smaller creators.

Some Instagram users are already critiquing Mosseri’s message, including Dr. Carolina Are, an online moderation researcher and pole dancer who has authored academic papers about Instagram’s algorithm.

“Despite what you say, it really does not feel like you have creators, especially small creators, at heart,” commented Dr. Are, who uses the handle @bloggeronpole. “People create reels because it seems to be the only thing that gets engagement — but they require so much work. Because of IG’s lack of transparency, creators are trying to follow your changes on a system that doesn’t seem to be made for them.”

Dr. Are, as well as the meme creators who protested this weekend, are also concerned about the extremely opaque system behind “shadowbanning,” or when a creator suspects their content has been deprioritized by the algorithm for reasons they’re not aware of. For example, Dr. Are has pioneered research on the affect of shadowbanning on pole dancers. But for the most part, social media platforms deny instances of shadowbanning, leaving creators in a tricky situation (and, at the same time, Meta does own patents on the practice).

Instagram gets worse with dark patterns lifted from TikTok