In February, parents received a shock when a report from the U.S. House Committee on Oversight and Reform showed that some commercial baby foods were found to contain “dangerous levels” of toxic metals.

This caused a flurry of information in the media on the impacts and what parents can do to avoid it, which included checking ingredients. That growing awareness for nutrition also benefited food companies focused on providing more nutritious options for babies and older children.

Amara is the latest startup in this space to raise funding, announcing today that it brought in $12 million Series A funding to expand its product line of nutrient-dense foods created for children up to seven years old. The investment comes 18 months after a $2 million seed round and growth that had the company going from from 100 to 1,000 stores. 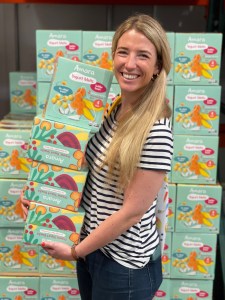 The latest funding round was led by plant-based foods company Eat Well Group in a majority partnership, with current management in place, that values the company at $100 million, founder and CEO Jessica Sturzenegger told TechCrunch. Existing investors from the seed round also participated, including Pharmapacks.

Sturzenegger and her team launched Amara’s first products in Whole Foods in 2017 after three years of working on the technology. The company developed proprietary technology that locks in the taste, texture and nutrients into a shelf-stable pouch of fresh baby food meals. It has 10 SKUs and a baby food line designed to mix with breast milk, formula or water.

Packaged foods found on grocery shelves today often are fruit-based and high in sugar, coming in at a price point of $3 to $7 per meal and which also have to be kept cold or frozen, she added. By contrast, Amara’s meals start as low as $1.80 per meal, in keeping with the company’s mission to provide products that cater to a wider range of family budgets.

This year, Amara expanded on that to produce its Yogurt Smoothie Melts, which Sturzenegger touts as “the only melt-in-mouth snacks for babies and toddlers without any added sugar.”

“Studies show that the food you eat from zero to seven years old impacts how you think, feel and perform later on in life,” Sturzenegger told TechCrunch “‘You are what you eat’ may be a cliché, but studies show it is also true, and parents are paying attention.”

Prior to taking the Series A dollars, Amara was already profitable on every order; in fact, it was growing three times year over year organically and through word of mouth, but after the baby food report came out in February, Sturzenegger said the company garnered increased attention by both parents and venture capital firms.

“Amara has proven an impressive ability to scale through retail distribution and e-commerce excellence, and the funding and industry expertise from Eat Well Group will help accelerate Amara’s growth as we head into 2022,” said Marc Aneed, president of Eat Well Group, in a written statement.

The funding will enable Amara to grow fast to meet the demand as it invests in hiring, product development and brand awareness. In addition to grocery stores, the company sells via its website, Amazon and grocery stores mostly in California, but in Sprouts nationwide. Over the next 12 months, Sturzenegger plans to get Amara’s products into more grocery stores.

Meanwhile, the shift to nutrition is providing room for many startups to disrupt the baby and child food market. As such, the global baby food market was valued at $67.3 billion in 2019, and is expected to grow to $96.3 billion by 2027, with $6.3 billion of that revenue coming from the U.S. market currently.

“There is room in the market, and for everyone to target different parents and price points,” Sturzenegger said. “Our niche is good food for everyone. If we are going to change the way the future generation eats, it has to be accessible.”

Flytrex raises $40M to build its drone-based delivery service across suburbs in the U.S.