It describes itself as the “future of urban mobility.” With a 93-mile range, and a 50 mph top speed, the futuristic-looking electric three-wheeler from Nimbus costs $10,000-ish and wants to position itself as a green alternative to cars, safer than motorcycles, and with a high degree of ease of ownership. We test-drove a prototype of the trike to get a feel for where the company is going.

The vehicle I drove was an early prototype, and it showed clear signs of that; the doors were hard to close, and the team had to “prepare the vehicle” before I was able to step into it, doing some last-minute adjustment before I took the steering wheel. And yes, despite that this is a three-wheeler that leans in the corner, it does have a steering wheel. As an experienced motorcyclist, I felt that was very odd indeed.

This prototype unit felt a little wobbly and unsteady, but I suspect that’s the teething problem of a still-in-development vehicle. The great thing is that it is fully enclosed; you have a heater, and seats, and a roof and a windshield and wipers. The number of times I’ve ridden in the rain wishing that I could just be warm and dry are innumerable, so those are huge pluses in the “pros” column. Of course, scooters with a roof have been around for a while (BMW made one back in 2000), and the Nimbus stands out by being almost perfectly incomparable with anything else on the market.

The main challenge I had was that, when I’m on a motorcycle, the “correct” lean angle of a motorbike is a function of speed, weight (of the bike + driver) and how tight of a turn you are making. Riding little slaloms in Nimbus’s prototype, it felt like the lean angle was “wrong” — too little sometimes, feeling as if the vehicle might topple over, and too much at other times, again feeling as if the vehicle might topple over. I gave the feedback to the team and the company’s CEO, Lihang Nong, and the company was able to adjust some of the issues I had:

“We tuned the steering feel after you left based on your comments and then it drove much more predictably for new drivers,” Nong wrote in an email to me.

The luxury of having an early-stage prototype car, of course, is that everything can still be adjusted and updated, and it probably isn’t worth judging the vehicle on its driving characteristics after my brief test drive. On top of that, I hasten to add that I’ve driven tens of thousands of miles on two- and three-wheeled scooters and motorbikes, so I may be a particularly picky audience in this case.

My impression is that this vehicle isn’t for recovering two-wheeled speed freaks, but instead for people who wouldn’t otherwise care to figure out what one down, five up means. And that is okay, because that’s the vast majority of the population. 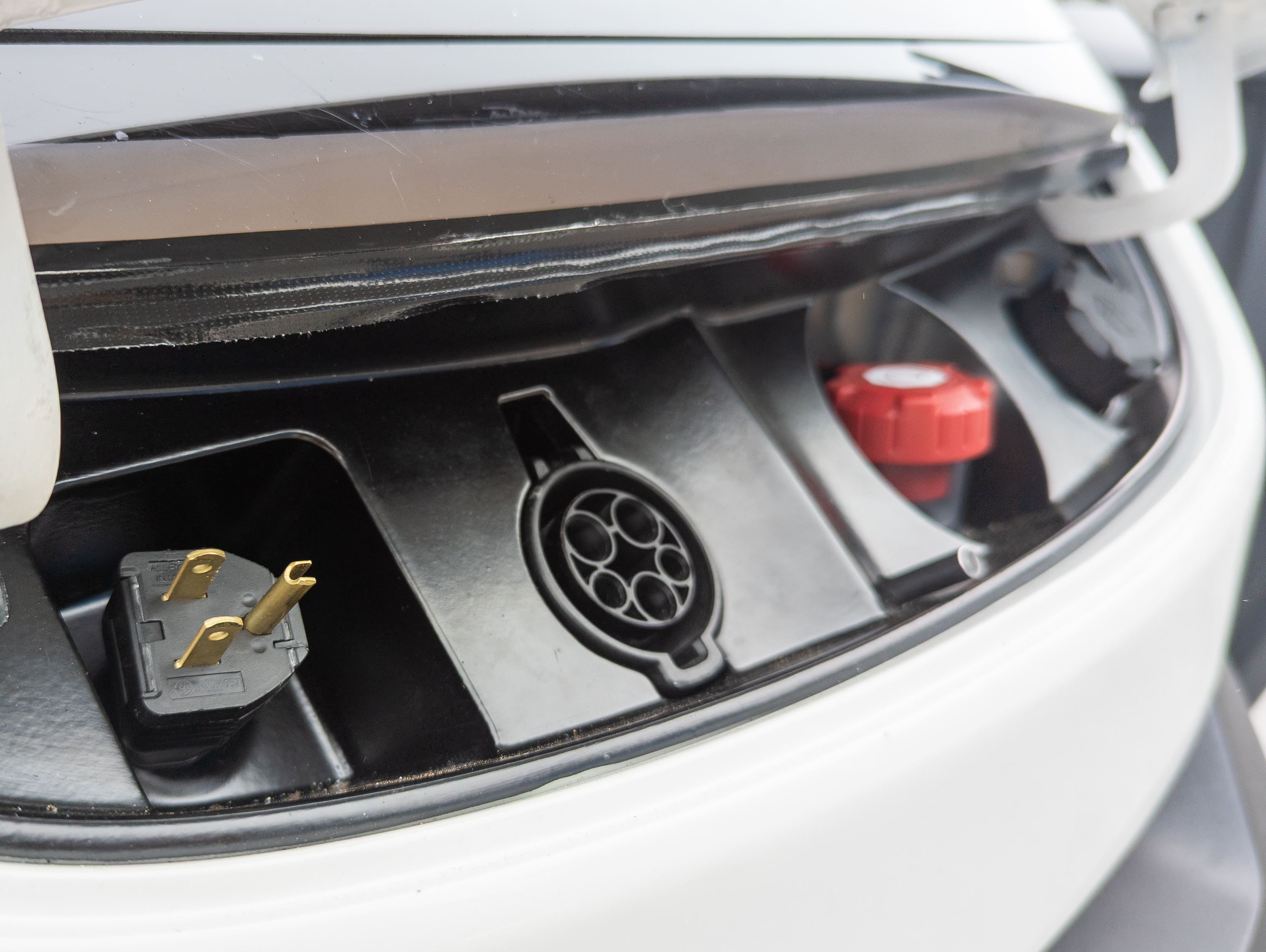 The vehicle has a number of really clever innovations. For example, underneath a small “hood” at the front of the vehicle, it has both a 220V charger — much like you would find on any electric car — and a vacuum-cleaner-style roll-out 110V charger. It means that you have plenty of options for charging the vehicle in many situations. 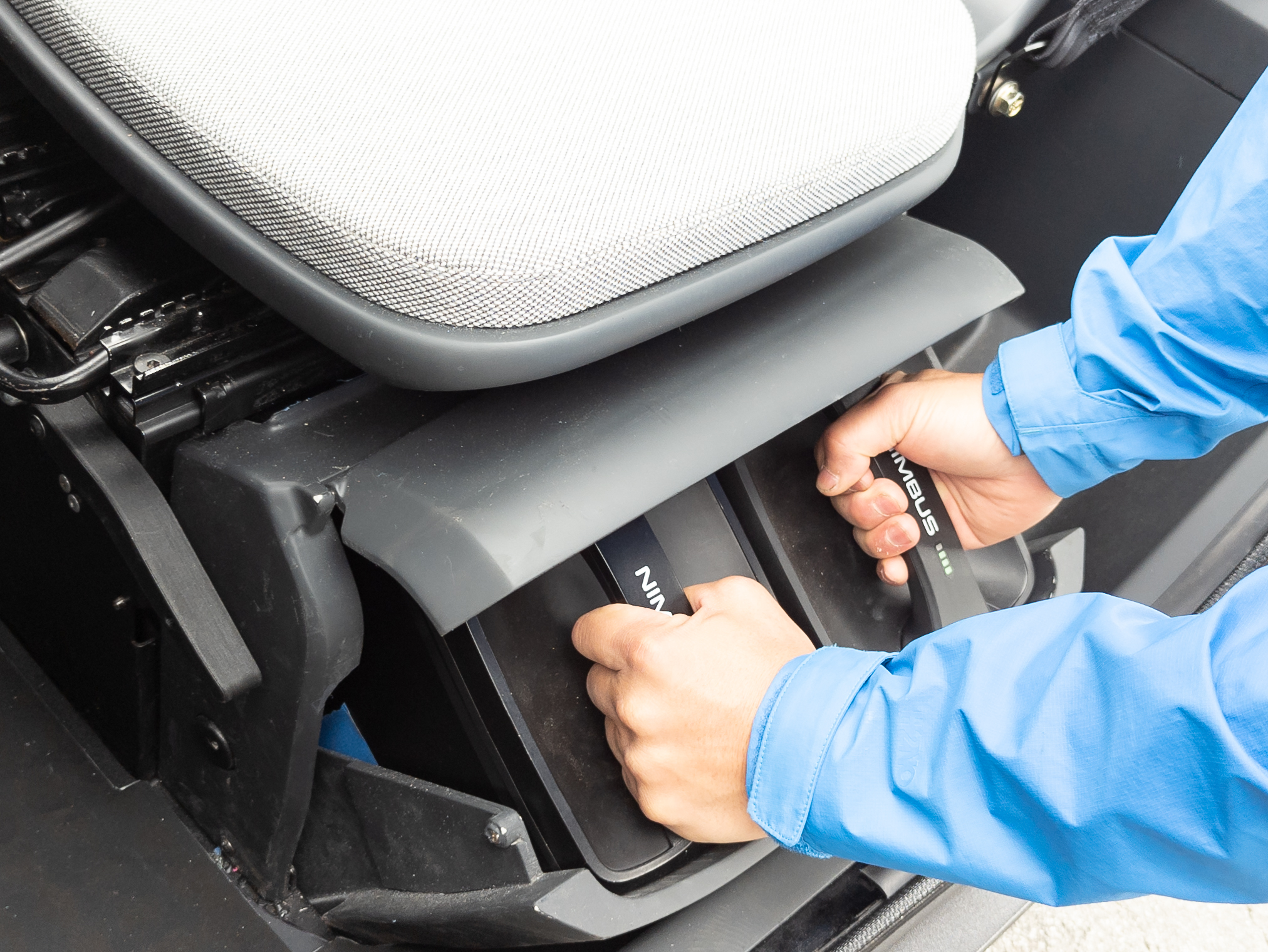 In addition to charging the batteries within the car, the batteries are actually removable. There’s four of them, all under the driver’s seat, and the company jokingly refers to them as “V-4 batteries.” Being able to remove the batteries to charge them elsewhere makes this vehicle a particularly interesting choice for people who don’t have assigned parking or a driveway where they can charge the vehicle. An additional bonus on that front is that the tiny car is short enough to be parked perpendicular to the curb — meaning you can take advantage of even the smallest parking spots.

The vehicle’s 50 mph top speed is a bit of a dealbreaker for me. For one thing, it means that you can’t really drive on freeways, including the bridge between San Francisco and Oakland. Now, technically the speed limit on the bridge is 50 mph, but on my return journey from the Nimbus test drive, I decided to actually stick to that speed limit for once in my car. Other cars were careening past me left and right. In a car, it didn’t feel safe to stick to the speed limit, and the Nimbus is a minuscule little thing compared to my daily driver. In a nutshell, it wouldn’t feel safe to drive across the bridge, and given that that’s the only way to get from Oakland to San Francisco easily, it torpedos the company’s bid for being a car replacement.

The little car has a back seat where a second person can sit behind the driver, straddling them with a leg on either side. There are seat belts that keep you in place, and the vehicle has a forward-viewing Advanced Driver Assist System (ADAS) that is working to keep you safe as well.

As a six-foot-four person, I’m probably at the extreme tall end of who fits in this car. With the seat (which does not recline) pushed all the way back, I could barely find enough space for my knees to move between the accelerator and brake pedals. I also felt my hair touch the windshield above me, and the pillars around the doors caused a pretty significant blind spot for me, which, given the limited size of the vehicle, I was struggling to move to avoid. Given my proximity to the windshield, I dread to think what would happen if I had crashed at 50 mph; there’s nowhere for my head to go except straight through the glass, and there wouldn’t be enough space for me to wear a crash helmet inside the car. #TallPeopleProblems, for sure, but worth noting.

The test drive itself was okay, and it’s impressive how far the small manufacturer has come. The vehicle’s acceleration wasn’t particularly impressive: Even the cheapest 125cc scooters I’ve driven seem to have more punch. I also wasn’t able to try the vehicle to its limits; when I hit the gas, the drive belt was skipping, making a horribly loud crunching/clicking sound. I feared for a moment that I’d broken the vehicle, but it turns out to be just a quirk of the little car’s prototype status. A little disconcerting, but more importantly I wasn’t able to swoop around in the car the way I would on a motorcycle, and it was hard to gauge what performance it’ll be capable of once production units start rolling off the production line.

I think the biggest challenge preventing me from putting in a preorder on the Nimbus is that while $10,000 is relatively cheap, it does give the cute little three-wheeler a tremendous and formidable competitive landscape. Ten large puts you in the same range as an electric cargo bike with all the bells and whistles, a reasonably priced electric motorbike or a very cheap secondhand electric car. Somehow, in the midst of that onslaught of more familiar competitors, Nimbus has to find itself a home and an audience.

On the whole, I really want to love the Nimbus. I think vehicles like this deserve to exist in the increasingly complex micromobility landscape. I can totally see a fleet of these being available where today you might use one of the rent-by-the-hour electric kick scooters. There’s absolutely a space for small cars or roofed motorcycles in the urban landscape. I’m super excited to see how they develop, and I really hope to get the chance to drive one of the production vehicles.

All in all, Nimbus is definitely worth keeping an eye on as the company gets closer to production.